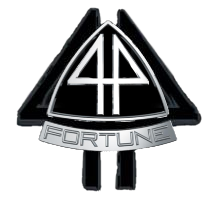 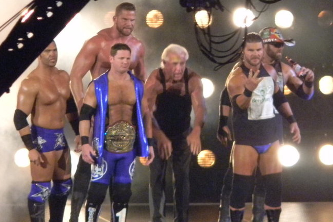 From strutting down with the Naitch… 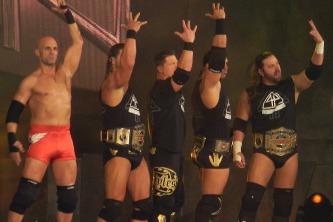 …to showing force with Daniels.
"Got it guys? It's not The Four Horsemen. It's the same fingers, but it's Fourtune! It's TNA, and it's time for a change!"
— Ric Flair, TNA Impact, June 17, 2010
Advertisement:

Fortune (originally spelled Fourtune) was a Power Stable in Total Nonstop Action Wrestling which started in 2010 and came to an end in late 2011, formed by Ric Flair and prominently led by AJ Styles.

Flair first came to TNA on January 4, 2010 as part of the massive influx of name value talent courtesy of Hulk Hogan and Eric Bischoff coming in, and didn't take too long before striking up an alliance with then-World Heavyweight Champion (and face of the company) AJ Styles, with Flair being AJ's manager and mentor. AJ would adopt Flair's lifestyle, cheating ways, sequined entrance robe (albeit with a hood), and even a couple of his moves as tribute, while Flair kept AJ on top until he lost the world title three months later to Rob Van Dam. Shortly thereafter, recently-returned former X-Division Champion Kazarian came into the picture, and he and AJ started fighting over being Flair's top guy to the point they couldn't work together long enough to beat Jay Lethal—until Flair introduced the solution: take AJ, Kaz, and fellow Team Flair allies Beer Money Inc. and Desmond Wolfe, and give them the chance to come together under the modified Horsemen banner of Fourtune.

Desmond's losing streak ended up keeping him out of the Fourtune lineup, while the Core Four (as they referred to themselves) were soon joined by Kaz's rival and X-Division Champ Douglas Williams, along with Matt Morgan as Flair's personal bodyguard, to make up the numbers against a band of ECW Originals who would henceforth be known as EV2.0 due to trademarks on the company name. Fourtune hated EV2 for the perception of their being overrated Garbage Wrestlers as well as outsiders taking spots away from the guys that built the company. (Also during this feud: the spelling of the stable name was tweaked to its more known version because everybody kept pointing out that they had more than four wrestlers.)

After virtually dominating the feud with EV2 and joining with Hogan and Bischoff's latest rehashing of the nWo to get the power to fire most of the Hardcore crew, Fortune contained most of the titles and most of the credibility within the Immortal alliance. And on February 3, 2011, when real life wrote the plot, they took that credibility and turned on Immortal with it, costing then-Antichrist Heel Jeff Hardy the World Heavyweight Title. The ensuing feud kept true to Fortune's original purpose, turned them into the faces the crowd always believed they were, added the return of Christopher Daniels to join the stable when they needed someone to fill in for AJ heading into Lethal Lockdown, led to a litany of noteworthy moments which had TNA diehards jumping for joy, and set the seeds up for the future character directions of all involved (although Flair missed out on much of the awesomeness, as he chose Immortal over Fortune).

Said future character directions took hold with the group's gradual disbanding in late 2011, what with the latest installment of Daniels Betrays AJ Styles Over Envy and Pride being arguably the best one yet (particularly as it led to Kaz and Daniels forming the infamous duo known as Bad Influence), Bobby Roode returning to his heel roots as one of the best proudly selfish win-at-all-costs villains wrestling has had in years, and James Storm and AJ Styles being compelling players with constantly sympathetic storylines, trials and tribulations, while having all-too-brief flirtations with the World Heavyweight Title. As for Flair, he would, as the pattern goes, return to WWE as an ambassador in the aftermath.

As usual, The Other Wiki

has a more extensive article on the history of Fortune.