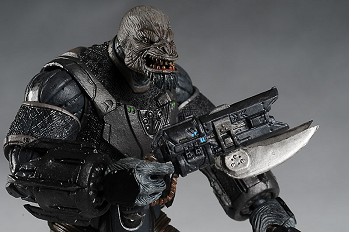 .
"H-he's like a bear! He's like a big, shaved bear that hates people!"
— The Scout on the Heavy, Team Fortress 2
Advertisement:

Someone has to be the true powerhouse of the villains; this would be Evil's answer to The Big Guy. A Giant Mook with personality, the Brute is huge, all muscle, loves to fight and is very good at it. However, while he may at first appear to be The Hero's equal or even superior in combat, subsequent battles will in all likelihood establish the Brute as being a constant jobber to the Hero.

He is usually a bully with a hot temper, and more often than not, also pretty stupid because of Brains Versus Brawn (though there are exceptions). Super Strength and Nigh-Invulnerability are common among powered varieties. Female brutes are rare outside of all-women groups, although not unheard of. Because of his size and power, expect some overlap with Evil Is Bigger, with the hero generally being portrayed as smaller than him.

If The Dragon isn't the one that gets sent out to antagonize the heroes on a regular basis, it's this guy. He is usually the lowest-ranking member of the inner circle's hierarchy, and his abrasive personality means he generally gets little respect from them, though he may exercise authority over the mooks.

He is often the first opponent the heroes face after their successes require that someone more capable be sent to take care of them. He tends to be either blindly loyal or just too thickheaded and incompetent to ever stand a chance of overthrowing the leaders. Despite his role as the primary brute force of The Evil Army, he is rarely ever as strong as The Dragon.

One thing to keep in mind with this character type is that it's the role and rank as opposed to just the personality that defines it. Pete from the Disney canon is a classic example of the Brute personality type: a big dumb bully that just loves to throw his own weight around. However, he's generally used as a Big Bad (or, in works like Kingdom Hearts II, The Dragon). As such, in most appearances, he is not technically a Brute.

Considering his aforementioned general role as the mean, stupid, and disrespected meat shield for his team, the Brute tends to be especially susceptible to Humiliation Conga and The Worf Effect. A Brute whose demeanor becomes implacable will quickly ascend to the status of Juggernaut, while the more emotionally volatile risk becoming The Berserker. Be wary too, recruiters, of a Brute who pets the dog, lest he prove to be a closet Gentle Giant and, if you mistreat him once too often, may very well eventually pull a Heel–Face Turn (if not a Humiliation Conga of his own) on you. The Dog Bites Back, in other words.

Muggshot is the team muscle of the Fiendish Five.

Muggshot is the team muscle of the Fiendish Five.