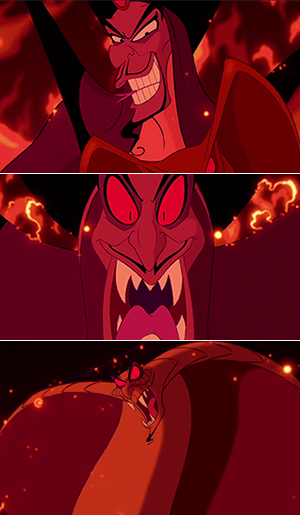 "A snake, am I? Perhaps you'd like to see how sssssnakelike I can be!"
"I will not turn into a snake. It never helps."
— Evil Overlord List, Rule #34note No, not THAT one.
Advertisement:

There's probably something symbolic about the tendencies of a villain to turn into a snake. In the West, there is a strong established symbolism for snakes as symbols of evil from The Bible (most famously the serpent in the Garden of Eden) and Norse Mythology, and there's Orochi in Japanese Mythology. Adding onto this, there is the fact that when walking in the wild, it's generally not a good idea to stop and pet a snake.

Of course, the result of all that symbolism is that when a villain turns into a snake there can be no doubt about the evil nature of a foe, and it gives The Hero a comfortably scary and suddenly less human foe to kill.

Villains do love their symbolism and cliches, however, so despite how often this trope tends to end with the villain chopped up on the hero's sword, (usually rather easily too) villains everywhere still love the order Squamata because, of course, Snakes Are Sinister. Think about it for a second: how often have you ever seen a villain turn into, say, a bear, a rhino, a lion, a koala, or something else that would actually be useful?

This trope is not strictly limited for the bad guys; indeed, there are arguably just as many places around the world that revere snakes as much as other places dislike them, and, if done properly, a serpentine hero can easily satisfy the Rule of Cool. However, when it's the good guys doing this, they typically turn into dragons instead of snakes. That said, villains turning into dragons is not unheard of either.

Extra points if the protagonist is female.

A specific variant of One-Winged Angel. Villains transforming into a dragon can fall under Dragons Are Demonic. This can also overlap with the Reptilian Conspiracy in instances when Snake People make themselves look human before revealing their true forms. If you're looking for video game characters being shown as grotesquely oversized compared to their surroundings on an overview map, that's over at Units Not to Scale. Also not to be confused with Make My Monster Grow.

Chang Pang and Blanca transform in their snake forms for combat.

Chang Pang and Blanca transform in their snake forms for combat.