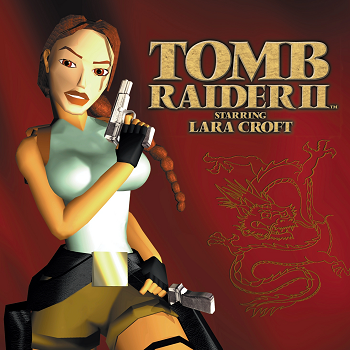 Tomb Raider II is the second game in the Tomb Raider series. The sequel to Tomb Raider, was released in 1997 for the PlayStation and PC; a Sega Saturn version was planned but dropped due to technical limitations. The next year, another sequel was released, titled Tomb Raider III.

Lara is after the legendary Dagger of Xian, which is said to give its owner "the power of a dragon". She finds herself in conflict with Italian mob boss/cult leader Marco Bartoli, who is after the same item. Locations in the game include Venice, an offshore oil rig, the sunken ocean liner Maria Doria, Tibet, and the Great Wall of China.

The game was generally considered as an Even Better Sequel, although many considered it to have too much combat (the final kill-streak is well above 400).

Creator Toby Gard left Core Design during the development of this game, due to "Creative Differences" (he was unhappy with Lara's over-sexualization), and co-founded Confounding Factor. Their first game was Galleon, a Spiritual Successor to Tomb Raider which took about ten years to make. It was actually pretty damn good but bombed on release. Confounding Factor closed down shortly afterward.

The Golden Mask contains examples of: