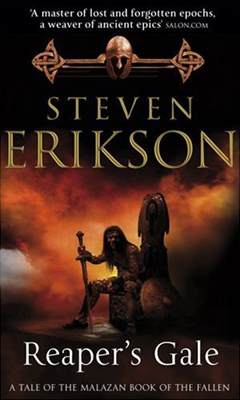 And so, in the clash of these two extreme systems, one is witness to brute stupidity and blood-splashed insensitivity; two belligerent faces glowering at each other across the unfathomed distance, and yet, in deed and in fanatic regard, they are but mirror reflections.
This would be amusing if it weren't so pathetically idiotic...
— In Defence of Compassion, Denabaris of Letheras, 4th century
Advertisement:

Reaper's Gale is the seventh book of ten in Malazan Book of the Fallen, following The Bonehunters. It concludes the Letherii arc, and dovetails it with the Bonehunters' main storyline.

The newest batch of champions who would challenge Rhulad Sengar, the Emperor of a Thousand Deaths, have arrived in Letheras. Among the champions are Icarium Lifestealer and the Teblor warrior Karsa Orlong. Urns have been prepared for these champions well in advance, as no one has ever managed to slay the Emperor with finality. But it seems that the land itself remembers Icarium...

Letur Anict, the Factor in the conquered Letherii territory of Drene, is well under way into conquering the area's native Awl people, and acquiring the tribesmen's herds that are highly sought after. The newly assigned Edur overseer does not like this, but he could not find any means of stopping the war. A masked man named Redmask appears, uniting the remaining Awl, in an attempt to fight back. His trump card — his inhuman companions.

Seren Pedac guides a party consisting of the eldest Sengar son, Fear Sengar, brother to Rhulad; the former slave, Udinaas; the former undead child Kettle; and the Tiste Edur's ancient enemy Silchas Ruin. Fear's motives are to find his ancestor Scabandari Bloodeye's soul in the hopes of saving his brother and his people. Silchas Ruin's motives, however, are known to no one but himself.

Meanwhile the Bonehunters, led by Adjunct Tavore Paran, after having travelled across the world allegedly in answer to the Tiste Edur's atrocity in the island kingdom of Sepik, land on Lether's shores.

Followed by Toll the Hounds.