Slain in Their Sleep 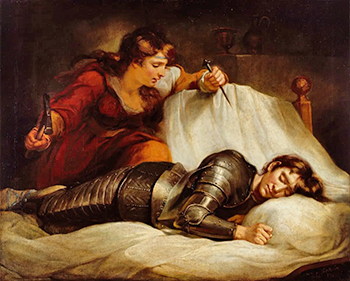 Jael and Sisera (1787), James Northcote
"Jael went out to Sisera and said to him, 'Come into my tent, sir. Come in. Don't be afraid.' So he went into her tent, and she covered him with a blanket. ... But when Sisera fell asleep from exhaustion, Jael quietly crept up to him with a hammer and tent peg in her hand. Then she drove the tent peg through his temple and into the ground, and so he died."
— Judges 4:18, 21, The Bible (New Living Translation)
Advertisement:

People are very vulnerable creatures when they're asleep. Their defenses are down, they usually feel like they're in a safe place. Thus when someone is killed in their sleep, it's portrayed as someone being killed when they're at their most defenseless. Doing so is often the modus operandi of the Dirty Coward, who would be afraid to kill someone when they can fight back — though for particularly powerful enemies such as vampires that may well be suicide to take on at their strongest, it may well be the only way to kill them without risking one's life or those of others.

It can also be used as Paranoia Fuel, as everyone has to sleep at some point, thus everyone (even the viewer) is vulnerable at some point. Often subverted by the killer stabbing a Sleeping Dummy.

This trope is often combined with Vorpal Pillow (since it needs the target to be immobile with their face exposed). This may also be done by a Dream Weaver in cases where Your Mind Makes It Real or the person's dream experience in some way influences the body. This is also one of most frequent uses of Animal Assassin, as getting an animal to attack an active moving person is just plain difficult.

Subtrope of Kick Them While They Are Down.

Compare Coup de Grâce, Dude, She's Like, in a Coma!, Sitting Duck, and Sickbed Slaying (another way of offing someone when they can't fight back). A good reason to Never Sleep Again. The sister trope of Kidnapped While Sleeping.

Not to be confused with its Sister Trope, Passed in Their Sleep, where someone's death during sleep is portrayed as peaceful and one of the best ways to go. Any examples where a character is injured, falls asleep, and dies from the injury while asleep go there. This is for when characters are targeted when they're asleep. Compare Remote, Yet Vulnerable.

Since this is a Death Trope, beware of spoilers. There will be unmarked spoilers on this page.

Through clever use of two spells, Goblin Slayer and his party avoid a difficult battle.

Through clever use of two spells, Goblin Slayer and his party avoid a difficult battle.