Big Brother Is Employing You 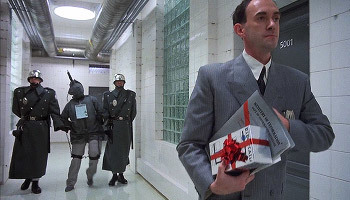 Just another day at the office.
"You are not allowed to have conspiracy theories when you're in the employ of the conspiracy."
— Dollhouse
Advertisement:

Hello, worker drone number 54234. I have been asked to inform you that you are the perfect viewpoint into our insanely oppressive dystopian society, because you are our dystopian society. Or at least a cog in the machine powering it.

Don't think that makes you important though. Get the least bit uppity with us, and we can and will easily replace you. And don't think anyone would care to remember you if that happened; we have already taken the liberty of erasing you from the few publicly available databases. Now, now, don't look so upset, it just came with the job. Granted, it is a bit hard knowing exactly what you are signing up for, when you are eager to get out there and take your boot to the face of the numerous enemies of our glorious state, or if you are volunteered at gunpoint.

As you can imagine, all of this can easily make you a morally ambiguous character in a very "delicate" position, which means you are very likely to be the main character of a work of fiction about this society. Because we don't want that, you will be terminated 23 and a half seconds after your Heel Realization.

Have a nice day.