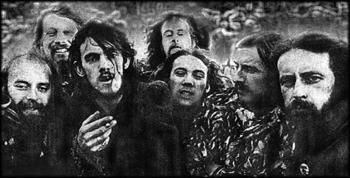 Hawkwind were one of the first space rock bands, formed in 1969 and still going strong today. Started out as Group X, later Hawkwind Zoo, before recording under their current name; also known as the Sonic Assassins and then as Hawklords for a brief period in the late 1970s.
Advertisement:

While their style is at heart a combination of Psychedelic Rock, Hard Rock, and Progressive Rock with bits of electronic music via Krautrock, they have also been referred to as "Proto Punk" because of their occasional Three Chords and the Truth moments and aggressive performances.

But you probably know them as "that band Lemmy was in before forming Motörhead".

Of their imitators, the best are probably 1980s space rockers Underground Zerø.

They've had an insane amount of members over the course of their career. Former band member Del Dettmar estimated that by 1994, there had been some thirty-five people who at one point or another had been official members of Hawkwind. Taken from the band's unofficial history, there are in fact more. Perm any thirty-five you like from: