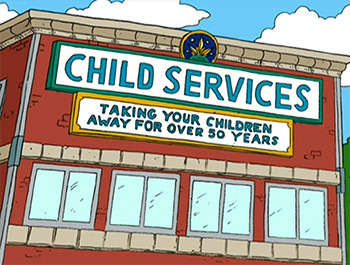 We all know that in fiction, There Are No Therapists and Social Services Does Not Exist.

On the occasions when Child Services does exist, they are almost inevitably shown to be one of two brands of stupid, if not both:

Occasionally, there are the cases in which whatever department is handling Child Services turns out to be actively sinister rather than simply destructively incompetent and/or bureaucratic. Often this is formulated as a political cautionary tale. Depending on the outlet Child Services may be portrayed as heavily biased against devoutly religious, non-traditional families, single parents, or non-custodial parents. Sometimes a perfectly good parent has their children taken away for extremely stupid reasons and has a horrific time trying to get the kids back.

This is a common in-universe trope in many works of fiction as well. Characters may stay in abusive situations and even avoid or refuse to cooperate with Child Services because they have heard horror stories about the results of such intervention, regardless of how positively or negatively Child Services is actually portrayed in-universe (a good way to make use of the trope without passing judgment on the department itself). Abusive parents may actively promote the idea that Child Services is a horrible system, in order to discourage their children from reporting the abuse.

Given the derogatory implications it foists upon social organizations, you could say that this trope is firmly on the cynical end of the Sliding Scale of Idealism Versus Cynicism. On the other hand, the crusading parents or child advocates fighting the system might indeed be portrayed as idealistic.

In Real Life, the wisdom and effectiveness of Child Services varies wildly depending on time and place. Some agencies may be too quick to intervene, or too slow. Some agencies are burdened with endless red tape, and some are quite efficient. Some agencies do a thorough job of investigating claims of abuse and vetting potential new homes for abused children, and some agencies do a slapdash job. The amount of money, authority, willpower, and compassion displayed by each agency (and each individual worker) varies from place to place.

In Real Life, it's quite rare for a Child Services agency to take children away from their parents permanently. Whether that's because the agency simply lacks the manpower/resources/authority/compassion to properly rescue all abused children, or whether it's because there are actually very few children who would truly benefit from a permanent separation, is a topic of heated debate.

Incidentally, not everyone who works at a Child Services agency is technically a "Social Worker". But fictional works rarely bother with the details.

See Don't Split Us Up, Promotion to Parent.