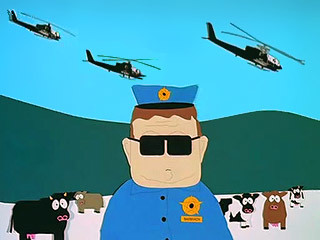 "That was a pigeon."
"Unmarked helicopters
Hovering
They said it was a weather balloon."
— Soul Coughing, "Unmarked Helicopters"
Advertisement:

The aliens are closing in, the terrorists are priming the warhead, the President's hijacked motorcade is arriving, or perhaps the loveable band of hackers is about to uncover the Government Conspiracy. Whatever the situation, The Men in Black are the first on the scene, and there's is only one way they can arrive: via a Black Helicopter.

Half Cool Plane, half Silent Runner, the Black Helicopter is to secret agents what the Batmobile is to Batman. Fast, quiet (in a way that real helicopters never are), stealthy, powerful, almost invisible and, of course, pitch-black, nothing screams cover-up quite like a black helicopter. Black Vans with radar dishes provide ground support, but aren't nearly as cool.

A somewhat dubious Truth in Television, as Black Helicopters are an ingredient of many real-life conspiracy theories. Possibly influenced by dark painted helicopters that get mistaken for black in poor lighting conditions while performing disappointingly mundane operations. Though it should be obvious, helicopters are actually very, very terrible at stealth. There is simply no way to make them completely quiet, they have next to zero endurance, they are slow, vulnerable, ruinously expensive, and restricted to low altitudesnote and all of these things are made worse by stealth modifications, which can add hundreds of pounds to the airframe, mess with aerodynamics, alter the lift of the blades, etc. Even the now-infamous super-secret SEAL Team Six choppers had slight noise reduction and were only cloaked to radar, and even that was imperfect. Military Plane-Spotters, take note.

In Real Life if a helicopter was involved in sinister operations it would probably not be painted black — to avoid the trope and avoid sticking out like a sore thumb.

Combat helicopters armed to the teeth with guns and rockets. Can haul troops or vehicles.

Combat helicopters armed to the teeth with guns and rockets. Can haul troops or vehicles.