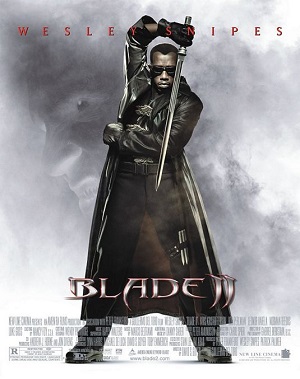 Blade II is the second film in the Blade Trilogy. It was released in 2002 and directed by Guillermo del Toro.

Following on from the first film, Blade (Wesley Snipes) continues to hunt down vampires in Central Europe and is reunited with Whistler after the vampires kept him alive on life support and moved him around to evade Blade's pursuit. The vampire leadership contact Blade to ask for his help to battle an even greater foe. A new breed of supervampires named the Reapers have spawned from Jared Nomak, the original carrier, and have started devouring and turning vampires en masse. Blade teams up with the special vampire unit, the Bloodpack, to destroy the Reapers before they have finished with the vampires and move on to wiping out mankind.