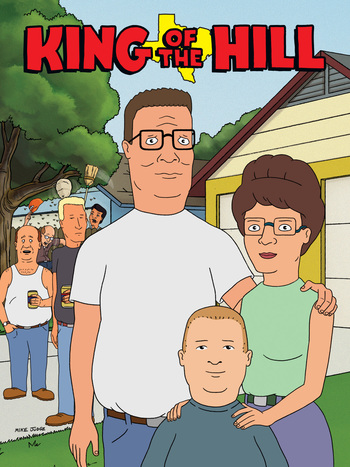 "I tell you what..."
Advertisement:

King of the Hill is a long running animated sitcom created by Mike Judge and Greg Daniels that aired from 1997 to 2010.

In the fictional Texas suburb of Arlen lives Hank Hill (Judge), a long time salesman of propane and propane accessories who's trying his hardest to always do the right thing. A lot of the humor in the series comes from the fact that Hank's a gigantic stick-in-the-mud. His friends, who are also his neighbors, include down-and-out divorced Army barber Bill Dauterive (Stephen Root), cuckolded Conspiracy Theorist and pest exterminator Dale Gribble (Johnny Hardwick), and Boomhauer (Judge), a womanizing motormouth whose job was unknown until a last-second reveal in the series finale.

His family includes his wife Peggy (Kathy Najimy), a substitute Spanish teacher who is a little too prideful about her abilities; his son Bobby (Pamela Adlon), a sensitive, naive and somewhat awkward child who's far from the athletic type that Hank hoped for (though he loves him all the same); and his ditzy niece, Luanne Platter (Brittany Murphy), who fled her trailer-trash upbringing to come live with the Hills for the first few seasons. Hank also has plenty of conflicts with his father Cotton (Toby Huss), a misogynistic World War II veteran, and his uptight Laotian next-door neighbor Kahn (Huss).

One thing that stands out the most about the series is that unlike most other animated sitcoms that feature wacky or outlandish situations (i.e. The Simpsons, South Park, Family Guy, and all of their myriad offspring), King of the Hill attempts to retain realism by seeking humor in the otherwise conventional, making it the polar opposite of Judge's previous show Beavis and Butt-Head.

After running for numerous seasons, the show finally ended its run on Fox on September 13, 2009. Four unaired episodes were released in syndication and on Adult Swim in 2010.

The entire series is currently available on DVD and Hulu. In addition to DVD, season 13 is also available on Blu-Ray as it is the only season containing episodes produced in HD widescreen. [adult swim] aired reruns from the show's final years until 2018. note Although from around 2015 until they lost the rights in 2018, they had stopped airing the Season 1 and 2 episodes. After [adult swim] lost the rights to King of the Hill in June 2018, Comedy Central picked up the rights to air the series, including the episodes from Seasons 1 and 2 which didn't air on [adult swim] previously. note However, the older episodes produced in 4:3 standard definition (any episode before "Lucky See, Monkey Do") air on Comedy Central in a cropped format to fit a 16:9 widescreen frame. The show also aired on various local stations around the U.S. from 2001 to 2019. Sadly, Comedy Central dropped the show after screwing it out of a timeslot where normal people would be able to watch it (they aired the show either late at night or early in the morning). After two years of it not airing any reruns on American television at all, King of the Hill's cable TV rights eventually went back to 20th Television. As a result of this, FXX began airing the series on September 20, 2021, with far more favorable results; all episodes air in the right aspect ratio, and in a better timeslot. In November of that year, the series also made a return to Adult Swim - while still airing on FXX.

after months of silence, Greg Daniels and Mike Judge said they would reunite and oversee a reboot of the series through their new animation company, Bandera Entertainment. While the full extent of the series is unknown, Daniels has stated the reboot's setting will be 15 years after the original series ended.

Boomhauer delivers an anti-smoking message, which ends with him walking away with a woman for an alternative to "oral gratification".

Example of:
And Knowing Is Half the Battle

Boomhauer delivers an anti-smoking message, which ends with him walking away with a woman for an alternative to "oral gratification".