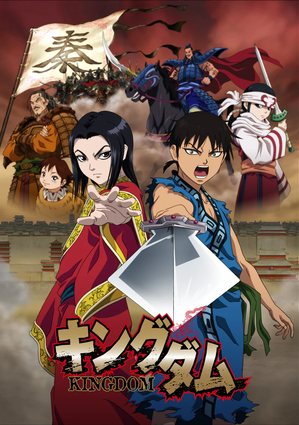 Millions of years have passed since the times of legends, where men and gods lived together. In this era, it was human ambition that drove the world. It was the great age of war lasting 500 years, the "Spring and Autumn Warring States Period"...

In the Warring States Period of ancient China (475-221 BCE), Shin and Hyou are war-orphans in the kingdom of Qin. They dream of one day proving themselves on the battlefield. One day, however, Hyou is taken to the palace by a minister. Winding up on the losing side of a power-struggle, Hyou manages to return to the village, barely alive. Shin then meets a boy who closely resembles Hyou, Ei Sei. For now he is the king of Qin; later he will become the emperor Qin Shi Huang.

, and a third season began in April 2020. Funimation has all of season 1 here.

A live-action film adaptation of the story was released on 19 April 2019.