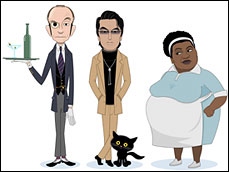 Kid Notorious was a short-lived animated series on Comedy Central. Basically, it was The Critic on the other side of the industry and starred real-life filmmaker and playboy Robert Evans as a caricature of himself. It featured many parodies of other celebrities, but it also featured Saul "Slash" Hudson as himself, playing the role of Wacky Guy. Other characters included Evans' pet cat, Puss Puss, his sassy black housekeeper Tullie Mae and his British butler, English, who was voiced by Evans' real life butler.