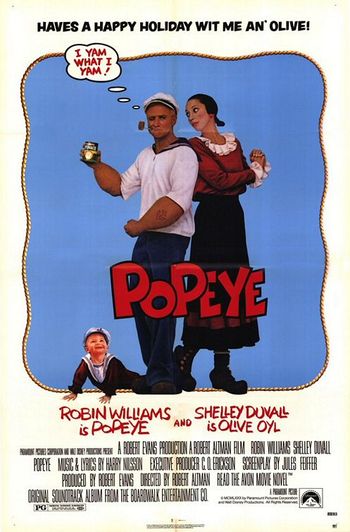 Or is he?
Advertisement:

Popeye is a 1980 Musical Live-Action Adaptation starring Robin Williams as the eponymous character and directed by Robert Altman, with a song score by Harry Nilsson, and a screenplay by Jules Feiffer.

The plot is effectively the origin tale of the two-fisted sailor man. After years on the sea, Popeye arrives in the ramshackle town of Sweethaven searching for his long-lost father (Ray Walston) and winds up not only caught in a Love Triangle with Olive Oyl (Shelley Duvall) and Bluto (Paul L. Smith), but also becoming an adoptive father to an abandoned baby boy he names Swee'Pea...

Though a financial success (the movie grossed more than twice its enormous budget in the U.S. alone), critical reception towards the film was mixed. Popeye fans were upset that the film was nothing like the Fleischer/Paramount cartoons and instead drew heavily from the Thimble Theater comic strip which birthed Popeye. The film derailed Altman's directorial career for a decade and was largely disowned by Williams for the rest of his life.