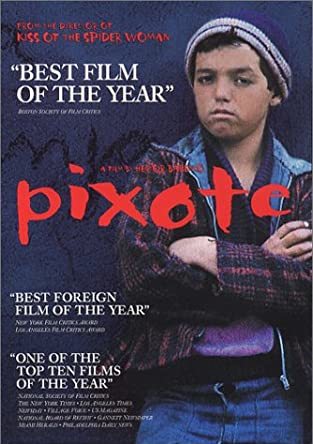 Pixote is a 1980 film from Brazil directed by Hector Babenco.

It is a relentlessly grim tale of the lives of homeless Brazilian youth. Pixote is a boy of 13 or so, who is scooped up in a police roundup and imprisoned in a juvenile detention facility. It is a hellhole, a place of filth and depravity where rape is rampant and where the guards and warden care only about exploiting the children, when they aren't murdering them. Pixote takes to huffing paint to escape his misery.

One of the youths is beaten to death by the guards. After another boy is framed for that murder, and himself beaten to death by the guards, Pixote and three of his friends—Chico, trans female Lilica, and Lilica's lover Dito—escape. But life on the outside really isn't that much better, as Pixote and his young friends are abused and exploited by the scummier elements of the Brazilian criminal underworld.

Child actor Fernando Ramos da Silva was plucked from poverty in the slums of São Paulo to play Pixote, a character much like himself. His acting career petered out soon after Pixote, he returned to the slums, and in 1987 he was shot and killed by police.