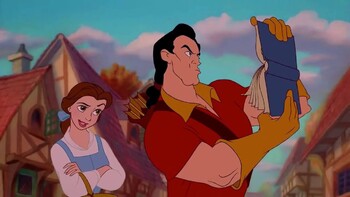 No one complains about the lack of pictures like Gaston!
Stanley: I feel really awkward with you reading over my shoulder like that, so...
Zero: I can't read.
— Holes
Advertisement:

A common plot for a Very Special Episode: A character, typically a friend or acquaintance of The Hero, is revealed to be illiterate by some odd quirk of behavior. This is typically a shameful secret to them; the episode typically ends with their beginning to study, and the issue is never mentioned again.

This plot lends itself to mysteries because of the suspicious behavior used to cover up illiteracy and the opportunity for a character to be cleared of crime because the crime depended upon being literate.

This trope has started to invite parody, and is probably on its way to becoming a Discredited Trope in relatively wealthy societies due to the vast majority of the people within possessing functional literacy. If it's still played straight, the character will probably be dyslexic, with the Aesop being that this has nothing to do with being uneducated and should not be a source of shame. Characters are also occasionally revealed to be unable to read English (or whatever is the dominant language where they are living) due to being recent immigrants.

Stories set in or around the Industrial Revolution (or similar time periods where universal education is a recent invention) may have the character in question quit school at a young age in order to support their family, or due to some other bit of the harshness of life. These Tragic Dropouts simply do not have the time to learn how to read, having never had the security of life to allow for an education. By the time they do become secure enough in their livelihood to take the time, they are simply too ashamed to admit it and usually get by with only a very basic literacy, or (if they're old enough) claiming that their eyes aren't what they used to be.

Stories set in an era prior to that (or where public education doesn't exist) may realistically have illiteracy as the norm. Violations of that fall under Medieval Universal Literacy.

May very well lead to a "Reading Is Cool" Aesop.

Sammy's snobbish rival has a lot of wealth and not a lot of intelligence or maturity.

Sammy's snobbish rival has a lot of wealth and not a lot of intelligence or maturity.