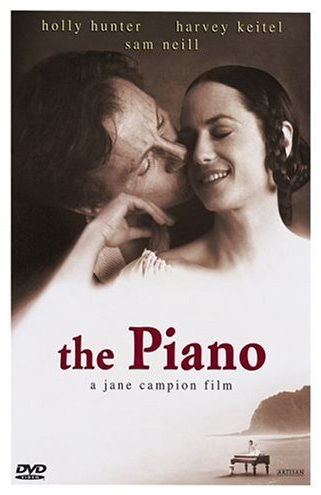 "The voice you hear is not my speaking voice, but my mind's voice."
— Ada McGrath
Advertisement:

The Piano is a 1993 drama written and directed by Jane Campion, produced by Jan Chapman, and starring Holly Hunter, Harvey Keitel, Sam Neill, and Anna Paquin (in her acting debut).

Hunter stars as a mute woman named Ada McGrath who, along with her precocious daughter Flora (Paquin), are shipped off to New Zealand after Ada's father arranges a marriage with her new husband, Alisdair Stewart (Neill). Ada leaves her native early Victorian Scotland, but brings along her beloved piano, which she considers to be her voice, regardless of her silence. Of course, Alisdair doesn't bother with the piano, and it is left on the beach. This leads to Ada's initial reticence at the marriage becoming active hostility, and things become more tense between the newlyweds when Stewart sells the piano to a neighbor, George Baines (Keitel).

Baines proposes a deal to Ada - she can earn her piano back, key-by-key, if she lets him do certain things while she plays. These "things" begin as simple as allowing him to touch her knee through a hole in her stocking, but grow into more overt requests. While Ada initially begins these lessons as a means solely to gain access to her piano, she grows to love Baines, and the two begin a clandestine affair. At the same time, Flora's boredom in the new home leads her to start interfering with the adults around her, and Ada's hatred of Stewart leads him to grow more and more frustrated as things grow ever closer to a breaking point.

The film received overwhelmingly positive reviews from film critics and was nominated for eight Academy Awards, including Best Picture and Best Director, of which it would end up winning three; Best Actress for Holly Hunter, Best Supporting Actress for Anna Paquin, and Best Original Screenplay for Jane Campion. It was also a huge box office success, as despite its small $7 million production budget, it earned just over $40 million in North America and a total of $140 million worldwide.

Not to be confused with The Piano Teacher, or The Pianist