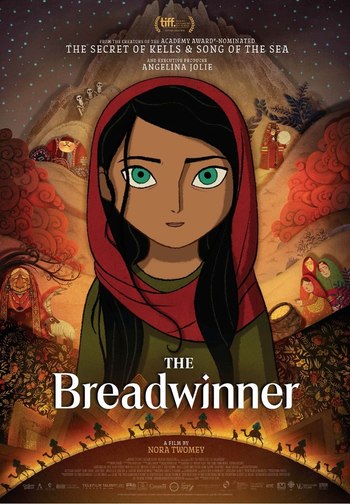 "Raise your words, not your voice.
It is rain that grows flowers, not thunder."
“We are a land whose people are its greatest treasure.
We are at the edges of empires at war with each other.
We are a fractured land in the claws of the Hindu Kush mountains,
scorched by the fiery eyes of the northern desert.
Black rubble earth against ice peaks —
we are Ariana, the land of the noble.”
Advertisement:

The Breadwinner is an animated film adaptation of the novel of a same name, co-produced by Cartoon Saloon (The Secret of Kells, Song of the Sea), Aircraft Pictures Canada and Angelina Jolie. It was directed by Nora Twomey, who previously co-directed The Secret of Kells.

Parvana, an 11-year-old girl, lives with her family under the iron grip of the Islamic Emirate of Afghanistan (Taliban). Decades of war and tyranny have plunged the land into abject poverty, and her amputee father, Nurullah, struggles to make a living as a scribe and street vendor. Though the regime cracks down severely on education and demands complete submission from all women, Parvana and her siblings are lucky to have a learned upbringing from their parents, who raised them to be literate and educated them on the nation's history through stories. Things, however, take a turn for the worse when the Taliban imprisons her father under false charges. Left with no other option, Parvana disguises herself as a boy in order to be the family's breadwinner and free her father before war engulfs the country once more.

The film premiered at the Toronto International Film Festival on 8 September 2017.

Has nothing to do with the animated series Breadwinners.

Breadwinner opens and closes on a retelling of the story of Arianna people, first told by Parvanna's father and then by Parvanna herself. Each time told to each other.

Breadwinner opens and closes on a retelling of the story of Arianna people, first told by Parvanna's father and then by Parvanna herself. Each time told to each other.