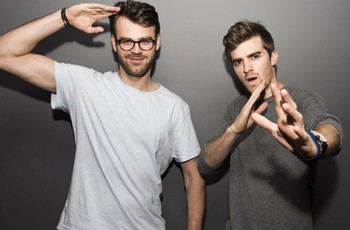 "So baby pull me closer in the backseat of your Rover that I know you can't afford..."
Advertisement:

The Chainsmokers are a New York City-based DJ duo consisting of Andrew Taggart and Alex Pall. They formed in 2012 under the management of Adam Alpert, and got off to a start doing remixes of indie bands. They got their big break in 2014 when they released "#SELFIE", a novelty dance song about, well, taking selfies. Due to the memetic and catchy nature, the song spread across the internet and became a massive viral hit, reaching #16 on the Hot 100. Unfortunately, for those same reasons they were written off as One Hit Wonders who would fade into obscurity immediately afterwards. This seemed to be the case, as their follow-up "Kanye" made in the same vein as "#SELFIE" completely flopped. Afterwards, The Chainsmokers vanished, with listeners both inside the EDM community and out regarding them as a joke. They were to be remembered only for a novelty dance song that destroyed their mainstream career.

Or so people thought.

In June 2015, they released "Roses" featuring guest vocals from the similarly named Rozes. The song marked a complete departure from the novelty dance sound they attempted to get famous for. The song slowly climbed up the Hot 100 at the end of the year, before finally cracking the Top 40, and peaked at #6 in 2016. Hot the heels of "Roses", they released "Don't Let Me Down", featuring vocals from Daya. It performed even better, ranking at #3 on the charts and establishing that they were more than just a one-off novelty act. The most impressive feat came in late 2016, when they released "Closer", a duet between Andrew Taggart and featured singer Halsey. It debuted at #9 on the charts, before quickly making its way to #1, making them the second EDM production act to top the charts as the lead artist (the first being Baauer). Finally proven themselves not to be the same novelty act from before, they've transformed their image into being one of the biggest names in EDM, and popular music in general.

And as if that wasn't enough, in 2017 they released their debut album Memories... Do Not Open, whose highlights include "Paris" as well as a collaboration with Coldplay titled "Something Just Like This", which topped at #3 on the Billboard Hot 100.

Tropes associated with the Chainsmokers: