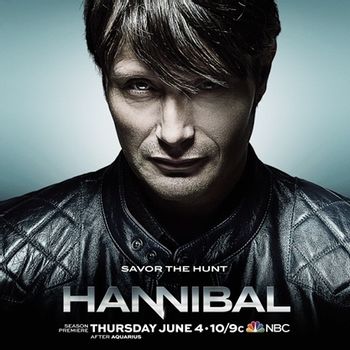 Hannibal is a psychological horror thriller series created by Bryan Fuller, based on the title character of the Hannibal Lecter franchise.

A peculiar genre mash-up of Forensic Drama and Gothic Horror, the series follows FBI profiler Will Graham (Hugh Dancy) as he investigates difficult serial killer cases for Special Agent Jack Crawford (Laurence Fishburne). Requiring further assistance, psychiatrist Dr. Alana Bloom (Caroline Dhavernas) recommends they enlist the help of the world-renowned psychiatrist Hannibal Lecter (Mads Mikkelsen), to both consult on cases and keep Will from becoming too caught up in the horrors of his job.

Wait, did we mention Hannibal Lecter is secretly a cannibal and serial killer?

Premiering on NBC on April 4th, 2013, the show was later renewed for a second season in 2014, and a third in 2015. The show quickly gained popularity by drawing Fuller and Harris fans together, and for spawning an enthusiastic fan base that has been skillfully and gleefully mirrored by the official blog (MAJOR UNMARKED SPOILERS)

. As to the full arc, Fuller announced an ultimate six-season plan for the show: after the two original seasons, the third-through-fifth were to be a re-ordered, re-imagined version of the book seriesnote The books in release order: Red Dragon, The Silence of the Lambs, Hannibal, and Hannibal Rising before the show closed on an original ending come Season 6.

Unfortunately, NBC cancelled the show in June 2015 (and only a few episodes into Season 3) due to poor ratings, adding it to the pile of Fuller shows cancelled just a few seasons in. Fuller and Martha de Laurentiis initially expressed some optimism about finding a new home for a fourth season, but nothing developed. Netflix picked up the streaming rights in 2020, and Hannibal quickly became one of the platform's most popular shows. That success raised hopes for a potential revival, though that remains purely speculative.

SPOILER WARNING: Following the show's conclusion, spoilers can (and will) be unmarked for the first two seasons to prevent the page being whited out.

open/close all folders
A-C
D-G
H-O
P-Z
I leave the series deconstructed, and end on a stinger quip. The pieces glitter before me. All is orderly. Cataloged. Defined and dissected. This is my design.
Feedback

Left horribly disfigured by Hannibal Lecter, Mason Verger and Dr Chilton remove their masks and prosthetics so they can show off their scars.

Alternative Title(s): The Silence Of The Lambs

Left horribly disfigured by Hannibal Lecter, Mason Verger and Dr Chilton remove their masks and prosthetics so they can show off their scars.