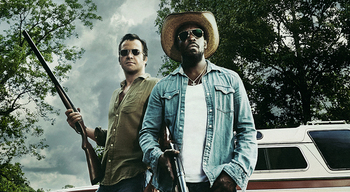 Hap and Leonard is a Sundance Channel drama series based on the characters Hap and Leonard, created by novelist Joe R. Lansdale and adapted from his series of novels of the same name.

Set in the late 1980s in the fictional East Texas town, it focuses on the titular characters (respectively played by James Purefoy and Michael K. Williams). Hap Collins, a white working class laborer who spent time in federal prison as a young man for refusing to be drafted into the military and serve in the Vietnam War and Leonard Pine, a gay black Vietnam vet with serious anger issues.