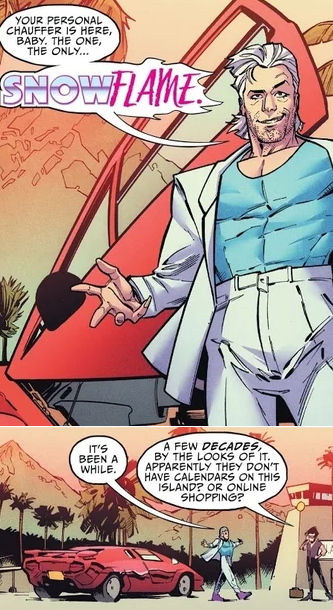 We can understand having trouble coping with change. The realities of The Vietnam War, for instance, were a very hard change for the veterans of World War II to accept. In fact, there might even be the urge to revert some of those changes, or at least live as though those changes never happened.

Yet to do that with pop culture?

It's one thing if you have trouble getting over The Beatles breaking up. This trope would be about people who act as though they are still around, plaster posters all over their homes, compare every other rock song in existence unfavorably to Beatles songs, and may only listen to other music as long as it's nothing past 1980 (or by ex-Beatles). These people are basically trying to bend reality back to the way they want it by sheer force of will. And that's with a band who are still relatively popular and influential; those who are besotted by something that is Condemned by History can be even worse.

Usually, this is played for laughs. We get a funny character, who is a walking anachronism by simple virtue of denial. Bonus points if this character forces other people to act as though this reality is true. We're Still Relevant, Dammit! would come into play here. Curiously enough, more than a few of these characters have an affection for disco music, hence the title.

Most likely has a Funny Afro. Would not take it kindly if told that Disco Sucks!.

Compare Born in the Wrong Century, Fish out of Temporal Water, Outdated Outfit. Contrast Fan of the Past, New-Age Retro Hippie. See also Awesome Anachronistic Apparel, which is wearing what should be absurdly outdated outfits and making it work.

Not to be confused with "Disco Dan" Ford,

the 80s ZX Spectrum computer game in which the player fixes nuclear reactors by jumping around inside them, or with Cool "Disco" Dan,

Hole Punch is one of King Olly's Legion of Stationary, set to guard the Yellow Streamer. It's more interested in dancing however.

Hole Punch is one of King Olly's Legion of Stationary, set to guard the Yellow Streamer. It's more interested in dancing however.