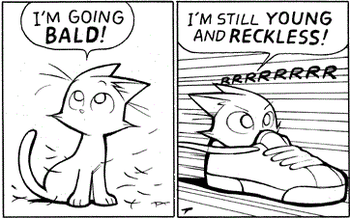 "The best years of my life are gone. ...And they sucked."
— C.C. Babcock, The Nanny
Advertisement:

The term "mid-life crisis" was first coined by psychoanalyst Elliott Jacques in 1965 to describe a period of major self-doubt felt by some individuals of middle age as the result of the passing of their youth. Symptoms may include depression, feelings of remorse and searching for some undefined dream or goal. It can affect people of any gender, although it doesn't seem to be present in all cultures and not all psychologists accept it even exists. Even in cultures where such a thing does tend to exist, it usually only affects about 10% of middle aged adults; most individuals actually experience a mid-life satisfaction, reconciling with the path their life has taken and beginning to shift focus to lighting torches for the newer generations.

In fiction, by contrast, a mid-life crisis tends to consist of several pieces of behavior carried out by middle-aged men in a rash attempt to recapture lost youth (it being limited to men is probably because Most Writers Are Male):

As can be seen from the examples, some works have a mid-life crisis as the main engine of their plot; in others, such as soap operas, Status Quo Is God, and so after an episode or two of his crisis, the man will basically go back to normal and behave as if nothing ever happened.