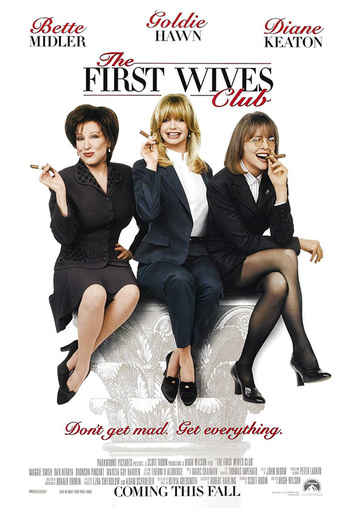 "Don't get mad. Get everything."
—Ivana Trump
Advertisement:

The First Wives Club is a 1996 comedy directed by Hugh Wilson, adapted from the novel by Olivia Goldsmith. It features a trio of middle-aged women teaming up against their estranged husbands and their current lovers.

The film starts in 1969, with a graduation day at Middlebury College, Vermont. Among the graduating class are four close friends Elise Elliot (Goldie Hawn), Cynthia Griffin (Stockard Channing), Annie Mac Duggan (Diane Keaton), and Brenda Morelli (Bette Midler). Cynthia makes them all promise that they "will always be there for each other throughout the remainder of their lives." The scene then switches to the 1990s. The promise has not been kept as they have all lost touch with each other. Cynthia is an affluent but lonely and depressed woman. Her husband has just divorced her for a younger woman. She takes care of some final arrangements and then commits suicide.

The story proceeds with what has happened to the other three ladies. Elise had become a successful actress, even winning an Oscar once. But as she entered middle-age, her career has declined to her playing in B movies, and then she is mostly cast as the "mother" of various leading ladies. Her husband Bill Atchison (Victor Garber) became a major film producer due to her contacts, but he has now divorced her and moved on to starlet Phoebe LaVelle (Elizabeth Berkley), and he and Elise are involved in a legal battle over their joint assets.

Annie has not fared much better. She married Aaron Paradis, CEO of an advertising agency, and she has spent many years as a housewife. Aaron has recently left her for their therapist, Dr. Leslie Rosen (Marcia Gay Harden) - a therapist who was already overseeing Annie's considerable self-esteem problems. Brenda is even worse. She helped set up her husband Morton 'Morty' Cushman as an electronics tycoon, only for him to trick her into signing away any claim to his assets and then leave her for his 'executive assistant', young Shelly Stewart (Sarah Jessica Parker).

When Cynthia's last message reaches them, the trio reconnects and, inspired by the ways in which each of them has been wronged by their ex-husbands, form the First Wives Club and set out to get their own back and take revenge. With the willing assistance of Annie's lesbian daughter Chris Paradis (Jennifer Dundas), aspiring designer Duarto (Bronson Pinchot), and society leader Gunilla Garson Goldberg (Maggie Smith), they have little trouble finding weaknesses in their former husbands' respective armors... particularly when they find that Phoebe LaVelle is only sixteen-years-old and Bill can be arrested for statutory rape.

A musical Screen-to-Stage Adaptation with a book by Rupert Holmes and songs by the Motown team of Holland-Dozier-Holland ran for several weeks in San Diego in 2009 in what was hyped as a pre-Broadway engagement, but that fell into Development Hell. A new version of the show (with a different book writer, director, and choreographer attached) is set to attempt its own pre-Broadway tryout in Chicago come 2015.