Film / First They Killed My Father 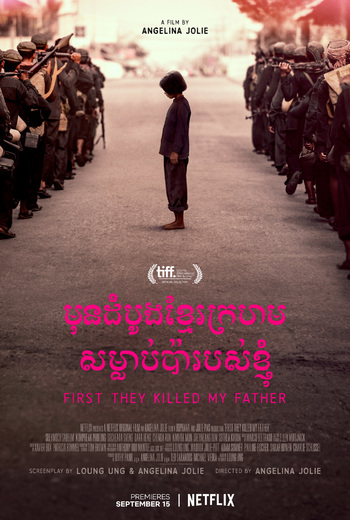 Cambodia, 1975. As the war in Vietnam comes to a close, the uprising of the Khmer Rouge is just beginning. And the events that follow will forever change the lives of the Cambodian people - including a young girl named Loung.

First They Killed My Father is a 2017 film based on the alike-titled autobiographical account of Loung Ung, adapted for the screen by herself and director Angelina Jolie. Born to a Cambodian army captain, Loung and her family were forced to leave their home in a coup and put to work in a labor camp, ultimately leading to her being trained by the rebels as a child soldier. The film is performed by Cambodian actors in their native Khmer language; it debuted locally in February 2017, and was distributed worldwide by Netflix in September of the same year.

A daughter of Cambodia remembers.