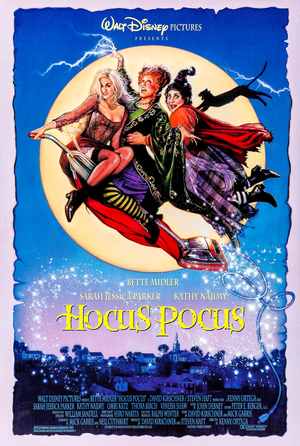 "I put a spell on you, and now you're mine!" (Poster drawn by Drew Struzan)
Advertisement:

A 1993 Halloween-themed Disney film "for kids". This was the second film directed by Kenny Ortega, previously known for Newsies (1992) and later recognized for the High School Musical franchise. The movie didn't make waves upon release, but eventually found a renaissance of fandom that has turned it into a seasonal Cult Classic and revitalized interest in the property for Disney.

The film opens in the year 1693. Thackery Binx (role shared by Sean Murray and Jason Marsden), a teenager living in Salem, Massachusetts, discovers his little sister Emily (Amanda Shepherd) has gone missing. Emily has been lured away to the farm of the Sanderson sisters, a trio of witches—consisting of older sister/leader Winifred "Winnie" (Bette Midler), middle sister/tracker Mary (Kathy Najimy) and little sister/siren-like predator Sarah (Sarah Jessica Parker) — who suck the life-forces of little children to prolong their lives; such is the fate suffered by Emily. Thackery attempts to save her, but the sisters transform him into an immortal black cat. The sisters are soon after captured by the townspeople and hanged. Before her death, Winnie pronounces her death-curse, that "on All Hallows' Eve, when the moon is round, a virgin will summon us from under the ground".

Fast-forward three hundred years. The Dennisons are a California family who have just moved to Salem, bringing along teenage son Max (Omri Katz) and eight-year-old daughter Dani (Thora Birch). On Halloween night, Max takes his sister trick-or-treating and gets to hang with new love interest Allison (Vinessa Shaw). Allison tells him of the legend of the Sanderson sisters and of a supposed way to revive them; skeptic virgin Max ends up resurrecting the diabolical trio. Now the kids and immortal cat Binx have to face the witches throughout the night, with the lives of every kid in Salem at risk.

A surge of re-interest in the movie spurred Disney into promoting it as a seasonal staple for the brand. In 2015, The Magic Kingdom launched a Hocus Pocus themed musical revue as part of Mickey's Not-So Scary Halloween Party: The Hocus Pocus Villain Spelltacular. In it, the Sanderson Sisters use the magic of the Magic Kingdom to return from the grave to throw a wild All Hallow's Eve bash, inviting some of Disney’s greatest villains to join them. While the sisters are Lighter and Softer than their film counterparts by necessity (having infanticidal witches at a Disney Theme Park wouldn't exactly be 'not-so scary'), the show is a loving tribute, complete with a show stopping rendition of "I Put a Spell on You" for the finale.

A Novelization released in July 2018, titled Hocus Pocus & The All-New Sequel, containing the novelization of the film and a sequel story. The sequel focuses on Max and Allison's daughter, Poppy, who grew up hearing the family story of the events of first film (and parents who avoid Halloween as much as possible). Poppy is skeptical of the tale and ends up in the Sanderson house on Halloween, twenty-five years to the day after the film, in an attempt to prove there's nothing to the story.

In 2020, a sequel was greenlit, to be executive produced by Adam Shankman (Hairspray) and directed by Anne Fletcher (27 Dresses) with a release on Disney+ set for 2022.

No relation to the 1994 similarly titled video game. Also unrelated is Kurt Vonnegut's 1990 dramatic novel of the same name.

Example of:
Refuse to Rescue the Disliked