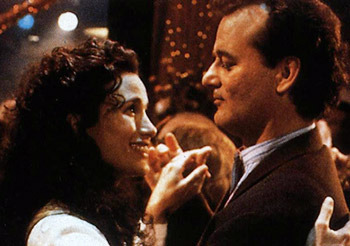 It's all in the timing.
Soon we are breathless, sweaty and laughing. After a while the style of the music changes—a crooner with a slow beat—but it doesn't matter because I am too dizzy from spinning round and laughing to continue. I hook my arms about Lochan's neck and collapse against him. I notice the damp hair sticking to his neck and inhale the smell of fresh sweat. I expect him to pull away and return to his physics now that our moment of silliness is over, but to my surprise he just puts his arms around me and we sway from side to side.
— Forbidden
Advertisement:

When Boy Meets Girl at a party or a club, and music (often performed by a live band) is playing, the next number that comes up will be a slow dance. Usually, it's a Contrived Coincidence, but smart characters will make sure beforehand to tell the band to make it a slow dance at the right moment.

This will also happen with two people who already know each other, and who have unspoken feelings for one another. May lead to a Dance of Romance.

There's a specific sub-trope where two characters are already dancing to a fast song, when the music abruptly switches to something slow, and there's an awkward "Do we keep dancing or not?" moment.