Literature / The Devil and Daniel Webster 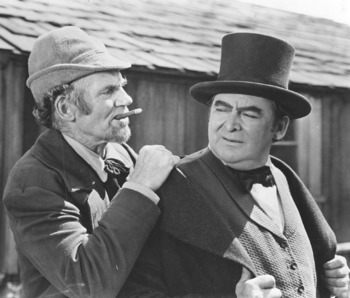 Set in early-19th-century New Hampshire, the story centers around farmer Jabez Stone, a man on whom fortune has never shined and whom it has, in fact, laughed upon. That all changes when the sly Mr. Scratch, who is none other than Satan himself, comes visiting. Jabez sells his soul to the devil and enjoys seven years of contractual good luck. However, near the end of the deal, Jabez decides to find some way out of it; he finds it in the famed attorney Daniel Webster. Now, Jabez can only hope Webster can give him a chance out of hell.

Its most well known adaptation was a 1941 film directed by William Dieterle, starring Walter Huston as Scratch, Edward Arnold as Webster, James Craig as Jabez Stone, and Simone Simon as Belle. It was retitled All That Money Can Buy in some states, as well as on Academy Award ballots. At that year's ceremony, it won composer Bernard Herrmann his only Oscar for his original score.

Was given a short musical parody by DominicFear. There is also an operatic adaptation by Douglas Moore, who also wrote The Ballad of Baby Doe. There is an animated Funny Animal adaptation for children called The Devil and Daniel Mouse.

This short story contains examples of:

The 1941 film contains examples of: