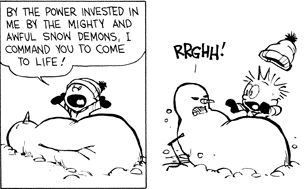 When someone or a group of people come across a written magic spell, or a magical-looking item (like a Spell Book, enchanted toy, amulets etc), they then try to play pretend magic with it, thinking that it's not something really magical. What Could Possibly Go Wrong?

And then it happens: the incantations and rituals they did are Real After All!

They may then discover it and maybe try actually using it for practical purposes. If they are lucky, it's just a normal magic spell or item. If they aren't, it's one that spells doom, either to themselves or somebody else or worse, everyone. Can get particularly odd when the magic stuff actually warn you of the dangers of doing magical things with it.

Contrast "Sorcerer's Apprentice" Plot, when the character knows something really is magical but doesn't realize the potential danger (and then gets scolded by their mentor); Magic Misfire, where the caster is serious about trying to cast magic, but messes it up; and Dramatic Irony, where the audience knows magic is real in the story before a skeptical character does. Compare and contrast Real After All, which is when the "real thing" only shows up at the end when everyone thought the thing in question was a fake. See also Idiot Ball, Schmuck Bait, and And You Thought It Was a Game. Can overlap with Evil Is Not a Toy and Genre Blind.