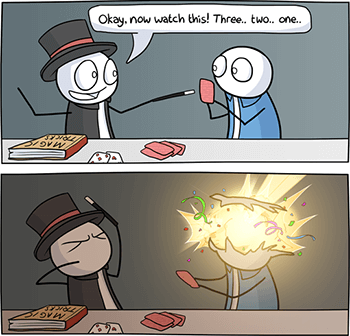 "Damn it, why does that keep happening?!"
"Magic! It is not... an exact science."
— Merasmus the Magician, Team Fortress 2
Advertisement:

A character has magical powers. Either because of inexperience, a Malfunction Malady, the magic equivalent of Phlebotinum Breakdown, or some other reason, the spell screws up, often resulting in an unintended effect or Amusing Injuries, or both. In a game, a Magic Misfire can be a subtype of Critical Failure. Derived from D&D's "Magic Missile"note Which, ironically, never misfires, it's stock in trade for the Inept Mage. This is a convenient way to make inexperienced characters nevertheless impressive, as their misspeaks can function like a Random Effect Spell and still be potent.

Not to be confused with a magic Misfile.

Blue casts a spell to kill Red's clone, but ends up killing the original Red as well.

Blue casts a spell to kill Red's clone, but ends up killing the original Red as well.