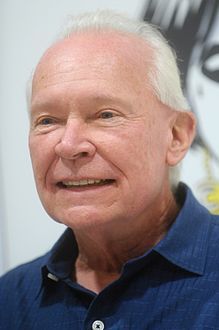 "...I still approach each book with the same basic plan in mind - to put some people under severe stress and see how they hold up."
Advertisement:

Terry Brooks is an American fantasy author, best known for his best-selling Shannara series. He is a prolific writer, with numerous Doorstopper length works to his name. To understand how prolific, consider that his first novel came out in 1977, his second in 1982, and his third in 1985; he had at least one novel published in every year from 1985 to 2013, except for 1989, with two novels in 2013. He also has the distinction of being the author of the first fantasy novel to be a bestseller upon its release, making publishers realize that fantasy could be a profitable genre. It is not unreasonable to suppose that there might be no fantasy genre as such without him.

His best known works include:

He Also Did the novelizations for Hook and The Phantom Menace.