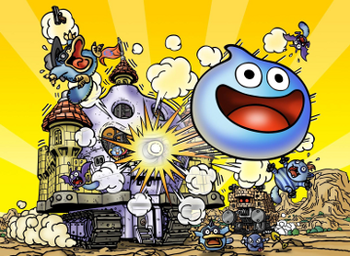 Dragon Quest Heroes: Rocket Slime is a Zelda-like action-adventure spinoff of the popular Dragon Quest series, released on the Nintendo DS in 2006. It's the sequel to Slime Morimori: Dragon Quest for the Game Boy Advance, which was never released outside Japan, though a Fan Translation is in progress.

In the quaint, faraway kingdom of Slimenia exists a Monster Town called Boingburg, which is populated completely by slime-like creatures. One day, almost completely out of nowhere, a mob of not-slimy monsters with tails called "the Plob" swoops in with a titanic tank, destroys the entire town, and kidnaps everybody. Everybody, that is...except for you, a slime nicknamed Rocket. Using your ability to stretch and bounce, along with the ability to summon your own enormous tank, your job is to infiltrate the Plob's various hideouts and rescue your family and friends - all 100 of them.

A third game was released for the 3DS in 2011. It hasn't been released in the US.