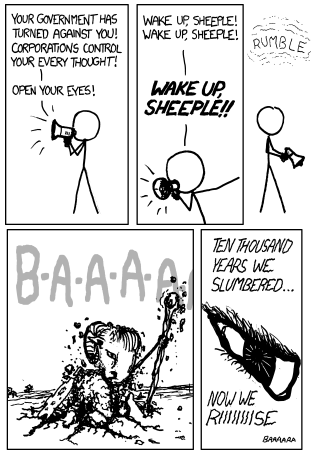 Oops.
Thrown into such a situation unexpectedly, the heroes will scramble to (a) avoid giving anything away [and/or] (b) try to extract anything useful about the bad guy or his plans out of the connection. And of there's the added bonus of causing a moment of panic, which is always good value.
— The Rant, Darths & Droids Strip 1046

A character, through recklessness or bad luck, ends up unintentionally using some form of long-range communication in a manner that contacts an evil entity. Typically this results in serious negative consequences, ranging from Mind Rape and Poke in the Third Eye to Demonic Possession. The means of communication through which Mordor is contacted may be magical, such as a Magic Mirror or Crystal Ball, technological, or some form of Psychic Powers. This trope may be a result of a character finding out what that button does by pressing it, or reading a Tome of Eldritch Lore aloud. Alternatively, The Klutz may cause this by tripping over the Artifact of Doom or dropping something on the Big Red Button. Sometimes, they need only Speak of the Devil to get it on the line.

See Schmuck Bait, Nice Job Breaking It, Hero and Mike Nelson, Destroyer of Worlds. Tempting Fate often preceeds this, while Oh, Crap! is a common reaction. Depending on who ultimately benefits from the communication, it can also result in Accidental Hero through Spanner in the Works.