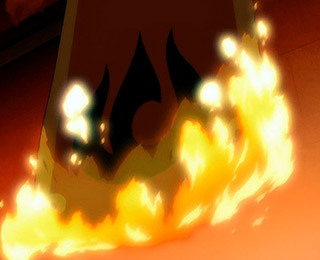 The Fire Nation flag, destroyed by fire.
"I'm going to have you wrapped in the U.S flag and burned personally by the President, in high-octane American gasoline!"
— Agent Burns, J-Men Forever
Advertisement:

A flag is the symbol of the nation it represents, its principles, its ideal, and its people and leaders. So, how does someone who's an enemy of said nation demonstrate that? You get one of their flags and light it on fire.

There are a number of ways this can be portrayed. It can be used by political activists to show their displeasure with a particular country, which is how it is most often used in Real Life in recent years. It can also be used to symbolize the defeat of a conquered nation, especially if done by their conquerors.note An alternative form of displaying contempt to a hated enemy was displayed by Soviet troops participating in the victory parades in Moscow in 1945; the Red Army marched over a sea of captured German flags and regalia, symbolically rubbing in the totality of their victory. Occasionally, dissidents might burn the flag of their own country.

There is a more positive version as well. In some countries, such as the United States and Denmark, it is customary for old, worn-out flags to be ceremonially destroyed by fire. This is referred to as retiring the flag. The US Flag Code

instruction on the matter:

The flag, when it is in such condition that it is no longer a fitting emblem for display, should be destroyed in a dignified way, preferably by burning.

It is worth noting that to both prevent this from happening and to stop protesters from hurting themselves,note many synthetic fibres melt as they burn — and now guess what many flags are made from today there are a small but growing number of fire-retardant flags on sale. Trying to burn one of these

tends to end rather dismally.

Book Burning is a similar form of setting cultural symbols on fire, as both a protest and a display of power. Compare Tattered Flag for when a ruined flag is shown.