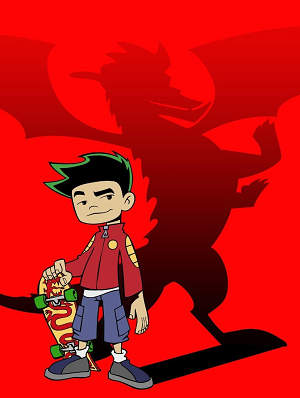 I'm a dragon, I'm not braggin', it's my destiny
I'm the magical protector of the NYC!
"This is called a Dragonstone. It will allow you to control the dragon’s power and still return to your human form. Now, please close your eyes… [...] ...There. You should be OK now. This Dragonstone is now attuned to you. Be sure to keep it safe."
—Azura, giving Corrin the Dragonstone in order to turn into a dragon, Fire Emblem Fates
Advertisement:

We all know that dragons make a work better, but when it comes to actually making dragons into characters, it's a little troubling. Large flying lizards are cool but it's hard to put them in buildings or give them emotive expressions.

Enter the Weredragon: a dragon that can spend most of its time comfortably looking like a human being or, alternatively, a human being who can transform into a dragon. Either way, you get a relatable humanoid character while simultaneously having a big intimidating lizard to do lizard stuff. The reason they might be human can vary. Sometimes it's because maintaining a dragon form can consume energy, sometimes it's to blend in, or sometimes it's in order to play A Form You Are Comfortable With. However they will still commonly be referred to and identified as a dragon even if they spend most of their days as a human. Whether they are born like a human or hatch from an egg is usually a question left to fan speculation.

A Sub-Trope of Our Werebeasts Are Different, Voluntary Shapeshifting and, for the dragon-to-human variant, of Humanity Ensues. See also Scaled Up for transforming into (large) reptiles (including dragons) as a One-Winged Angel; it can overlap with this if the dragon is their true form (as opposed to gaining a dragon form).