Manga / To the Abandoned Sacred Beasts 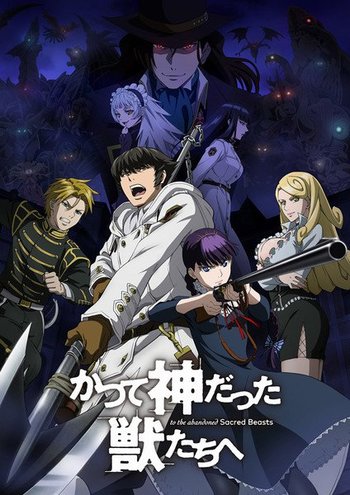 In war, men become beasts. War makes gods out of beasts. When war ends... where do the gods go? Wolves walk the forest of despair, the wasteland of lamentation, the sea of bitterness, in the time of dark and light. To kill those that were once their friends.

To the Abandoned Sacred Beasts (Katsute Kami Datta Kemonon-tachi e) is a manga by Maybe set in a Fantasy Counterpart Culture of the U.S. after the Civil War. To win the war, the North brought into existence the Sacred Beasts, also known as the Incarnates. A special group of soldiers were chosen to become these monsters. Now the war is over and the peace has been restored, or at least it should have. The surviving Sacred Beasts are losing their humanity, becoming a threat to the population. Now his old captain must uphold their vows and kill his former comrades.

Nancy Schaal Bancroft is the daughter of one of those soldiers, and after failing to kill the Beast Hunter, she ends up traveling with him, and comes to understand his reasons for upholding that vow.

An anime adaptation premiered on July 1st, 2019. The anime is made available outside of Japan via Crunchyroll.