All Crimes Are Equal 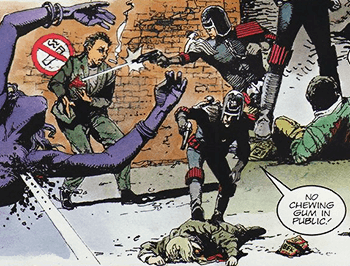 Let the punishment fit the crime? Feh! All criminals are scum, and deserve nothing less than full justice!

This is what happens when a law enforcement apparatus is afflicted with Black-and-White Insanity.

In fiction, if an empire or government is meant to be seen as evil, any crime, no matter how minor, is punished with the same brutal force. Most often this manifests itself as a slight slip-up in the presence of a ruler, such as merely speaking a bad word or telling a joke about the emperor (or being even tangentially suspected of helping a rebel in any way, even unknowingly) getting you put to death, imprisoned for life, mind-wiped, tortured, crucified or punished in a similarly excessive way.

The problem, however, is that if merely suggesting the emperor is fallible carries the death sentence, what do you do with more severe criminals such as arsonists? Traitors? Murderers? Bank robbers? Jaywalkers?

One has to assume that every crime imaginable is punished in this same way (although The Caligula may feel that disagreeing with him deserves a more harsh punishment than crimes against humanity), which sort of defeats the purpose of law and punishment in the first place. One would almost expect petty criminals, knowing it's execution for them either way, to "go for broke" and engage in more violent crimes for the fun of it or possibly spite and/or despair. In both fiction and real life, this frequently results in a variety of Fates Worse Than Death for the big crimes while a pickpocket "only" gets his head cut off, which, if you think about it, sort of defeats the concept of All Crimes Are Equal in the first place and making it just plain Disproportionate Retribution.

Certainly, this method of governance has a great tendency towards generating rebels: since even minorly disagreeing with those in power brands you a traitor anyway, screwing you over forever, why not die fighting the power that has so unjustly attacked you?

A very common view for a Hanging Judge, especially if you've committed a Felony Misdemeanor.

When this applies to punishment in the afterlife, then we have an Easy Road to Hell, a.k.a. All Sins Are Equal.

In stories where a steady supply of criminals to use as a Condemned Contestant or Boxed Crook is required, society may devolve to this to keep the stream of "volunteers" coming once the obvious choices for felons have been exhausted.

The flip-side of this is a Played for Laughs version when all crimes receive the same punishment, but it's community service or equally light punishments.

See also Jaywalking Will Ruin Your Life. Also a common form of the Dystopian Edict.

In Athens, as ruled by Draco, all crimes have one penalty: DEATH!

In Athens, as ruled by Draco, all crimes have one penalty: DEATH!