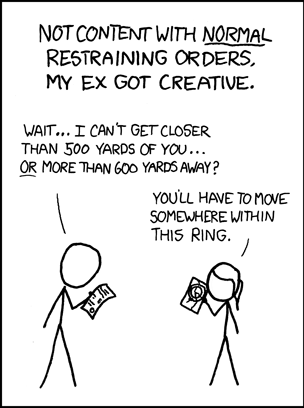 Like many Real Life conventions, a restraining order in fiction is only as effective as the Rule of Drama or Rule of Funny need it to be.

So you've slapped your Stalker with a Crush with a restraining order? Guess what — it won't do a thing to protect you. It just encourages your stalker to get creative (for instance, getting a helicopter license). So you're a Heroic Comedic Sociopath who's been told never to go in that bar again (don't ask — it involved noodles)? You'll be shot on sight if you go anywhere near it.

Unfortunately, even in Real Life, restraining orders work on the honor system (think of it like the Amish computer virus

). A restraining order cannot physically separate one person from another (unless the offender is fitted with an electronic implant that delivers traumatic shocks whenever he or she gets too close, but that's usually only in futuristic or dystopian stories — or, more realistically, an ankle monitor

, which has often happened); it just means the other person can call the police and have them arrested on sight if they're violating it.

Also, restraining orders on TV usually require the person to maintain a minimum specified distance from another, such as 500 feet, and a common comedy gag is for the person to be dog-piled by an army of police officers the very microsecond they cross some invisible line in the sand and get "too close" to the person in question. In reality, restraining orders usually just order the person to generally refrain from contacting, harassing, following, or stalking the other person, something that doesn't deter a determined stalker (otherwise the offender could violate it entirely by accident just by, for example, being unfortunate enough to go to the same Starbucks at the same hour as the victim). Another such gag involves the person for whom the order was issued torturing the restrained person by continually approaching them, under threat of the order being enforced (another reason they aren't given specific distance limits). In reality, if you approach someone against whom you have a restraining order, they are not considered to have violated it, and if you do so continually, you may find yourself in legal hot water for abuse of the order.