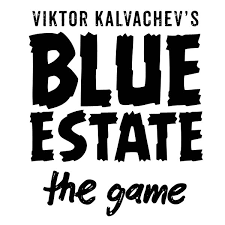 On the mean streets of Los Angeles, an alcoholic hit man and a desperate starlet dodge Russian mobsters, Italian gangsters, ninjas, hippies and the L.A.P.D. in a scheme to steal millions from a psychotic action movie hero.

Blue Estate is a black-humoured and corrosive rail shooter, adapted from the critically acclaimed and Eisner Award nominated graphic novel, Blue Estate by Viktor Kalvachev! It was developed by HE SAW and released on Playstation 4 on June 24th, 2014, then on Xbox One on February 18th, 2015, and then on PC on April 8th, 2015.

You play as Tony Luciano, the psychopathic son of the Italian mafia godfather of LA and Clarence, an ex-Navy SEAL, penniless and now a hit-man bent on cleaning up the mess started by Tony. As Tony launches a personal vendetta against the Sik Brother’s gang in an attempt to save his best dancer, Cherry Popz, Clarence wants to end the gang war, taking him to the farthest corners of Jamaica!