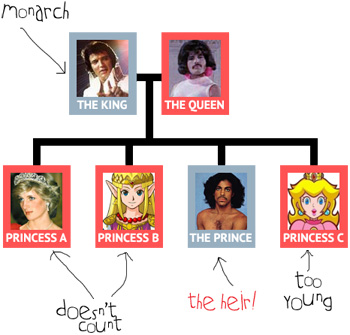 My anaconda don't want none unless you bear sons, hun! Also The Prince is dead. Long live the Prince!
Aloy: Has there ever been a Sun-Queen?
Priest: Many wives and consorts, of course. Or—you mean for the Sun to choose a Queen? This has not happened.
Aloy: Why not?
Priest: The Sun is masculine, of course, and he would choose his heirs thus.
Aloy: It's a light in the sky. I've never seen anything dangling from it.
— Horizon Zero Dawn
Advertisement:

The distinction is less clear than you might think. It's rarely the case that there are no male claimants, however, so if there's no clear heir (the king has no sons, but does have uncles, brothers, nephews, or male cousins) then a Succession Crisis often results. The threat of such a crisis is reason enough for kings of countries with these laws to go to great lengths to ensure that they have at least one son on the ground who is both legitimate and his official heir.

If the king has no son or circumstances seem to be making that problematic, the courtiers may get into the act. A Succession Crisis can be unpleasant all around. This is done commonly with a grieving widow queen or widower king, who is likely to be told You Have Waited Long Enough with great promptness.

Even in the fortunate case where the king has a healthy male heir, this only secures the monarchy for one generation. As soon as that son comes of age, he will start feeling pressure to marry and produce an heir of his own. Furthermore, only one child is dangerous; surely you need at least two to guard against tragedy (although this drastically increases chances of producing The Evil Prince, which comes with its own set of problems). This is one of the few situations where either My Biological Clock Is Ticking or I Want Grandkids is likely to apply to a male character.

Additionally, it's a good idea to guard against fraud. Mama's Baby, Papa's Maybe may raise doubts about whether the baby is suitable. Some monarchs will avoid putting all their eggs in one basket and make the spare a Hidden Backup Prince. (Bastards of the king are popular for fulfilling both these tropes, although as making them heirs defeats the purpose of Altar Diplomacy, they are best avoided.)

Although most common in stories about royalty, this trope also includes the common people. This trope is about heirs, and it is not intended to cover cases where the parent(s) merely wish for a boy (or girl) because they would like one, but is only when they wish for one to continue the family name — when tradition demands it.

Also: The blurb is a reference to the Hair Club for Men

, a company that specializes in hair restoration and hair replacement. The blurb is their actual sales pitch from their website... with a few words changed to fit this trope.

Of course, in the case of a Matriarchy, this trope is automatically gender-inverted (though with the benefit of removing all chance of Mama's Baby, Papa's Maybe). See also Royal Mess for the ways in which this can get interesting.