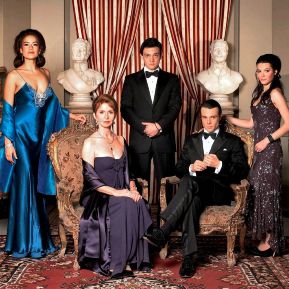 The most photogenic royals since The Tudors. (From left: Princess Eleanor, Queen Charlotte, Prince George, King Richard IV, and Princess Isabelle.)
"Everyone smile and look delighted, or else."
—King Richard IV, The Palace
Advertisement:

A short-lived 2008 ITV series about the machine behind the British Crown. Originally conceived as a West Wing-esque program about "a woman operating within the shadow of power", what resulted instead was a tongue-in-cheek soap opera in the style of Dynasty centered around a spectacularly dysfunctional fictional royal family.

King James III has just died, and the Prince of Wales—who initially fulfills every stereotype of the debauched young royal—suddenly inherits the throne. Not only does Richard have to contend with a public prepared to eat him alive at any wrong step and a hostile Prime Minister, but he has his family to deal with, as well: his party animal younger brother George, his wild card little sister Isabelle, the conniving Dowager Queen Charlotte, and his older sister, Eleanor, who has her eye on the crown herself.

Richard isn't alone, though; helping him spin the family's numerous scandals are his Press Secretary Jonty Roberts, his Private Secretary Sir Iain Ratalick, and his APS Abigail Thomas—with whom he quickly finds himself falling in love, but who happens to have signed a deal to write an expose on the royals.

Complementing the upstairs shenanigans of the Royal Family are those of the palace staff. Assorted footmen, valets, maids, and pages, all with their own agendas, keep things running more or less smoothly as they jostle for position and play out their own downstairs dramas.

Not to be confused with The Royals, a show debuting in 2015 with a very similar premise.

Note: all spoilers below are unmarked.