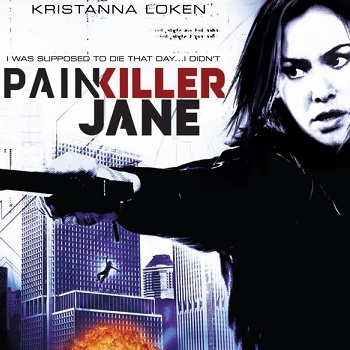 "My name is Jane Vasco. I work for a secret government agency that hunts Neuros, people who can do dangerous things with their minds. On my first assignment, something a little weird happened. Okay, something really weird. Until I get some answers, I'm gettin' on with me life; doin' my job; stocking up on Aspirin. Because, I gotta tell ya, pain's a bitch."

A television series based on the comic book Painkiller Jane, it revolves around Jane Vasco, a former DEA agent with the ability to heal from any injury being recruited by a secret government agency called NICO to hunt down people they term "Neuros" (short for "neurological aberrants") who possess mutations which give them extraordinary abilities. It only lasted one twenty-two episode season, which aired in 2007.

It is unrelated to the 2005 Painkiller Jane film, even though both it and the show premiered on the Sci-Fi Channel. The former was a backdoor pilot of the series, but once made, its plot departed entirely from the movie's.