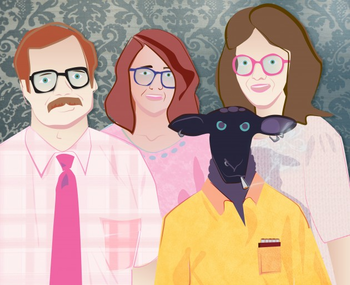 The Black Sheep is the one member of a family who does not fit in, the prodigal son, the castaway from The Clan or from the Big, Screwed-Up Family — unless he left on his own, smashing the door and Calling the Old Man Out. Can be The Un-Favourite, but not necessarily.

The Black Sheep might be The Un-Favourite but he can also be the Favorite instead. The latter case, of course, drives The Dutiful Son crazy as to why he's the favored one.

Sometimes the Black Sheep is really bad — AKA a criminal. Other times a Black Sheep is just considered rebellious and might be a Cool Big Sis or Cool Uncle. On occasion, he is actually the Defector from Decadence. Often, he is a Misunderstood Loner with a Heart of Gold.

In kids shows, there's a common Aesop where a Black Sheep from one of the kids' families will show up as either a Cool Big Sis (or brother) or a Cool Uncle. Often the Cool Relative will inspire emulation by all the kids in town (sometimes excepting only the kid who is actually related to him). Eventually this emulation gets the kids into trouble. Either the Black Sheep helps the kids out and then delivers the Aesop that they really don't want to be like him, or he reveals himself to be a Jerkass and leaves the kids in their mess (often to be saved by the one kid who didn't emulate the Black Sheep).

Contrast White Sheep, where all inversions of this trope belong. An Oddball in the Series is often called its "black sheep". The Remittance Man is a specific example who mostly appears in The Western; an unwanted scion of a prominent European (usually British) family, sent overseas to make his fortune or to avoid scandal, and paid a regular sum of money (the "remittance") to stay there.