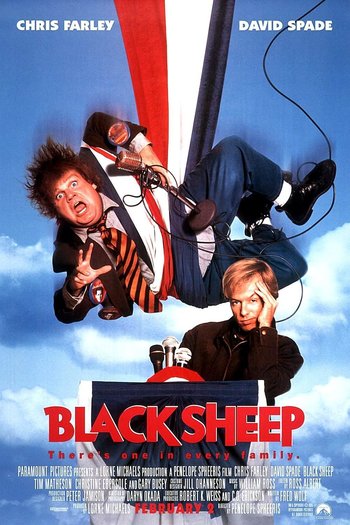 There's one in every family.
Advertisement:

Mike Donnelly (Farley) is the bumbling younger brother to Al Donnelly (Tim Matheson), an up-and-coming political figure in the state of Washington trying to defeat two-time-incumbent Evelyn Tracy (Christine Ebersole) and become Governor. Problem for Al is, try as Mike may to be a good little brother and offer his services to Al's campaign drive, his good intentions always end up going horribly wrong and they become P.R. nightmares for Al and his main advisor, Roger Kovary (Timothy Carhart). To attempt to contain Mike, Al and Roger assign campaign worker Steve Dodds (Spade) to shadow Mike and keep the unfortunate consequences of his actions at bay.