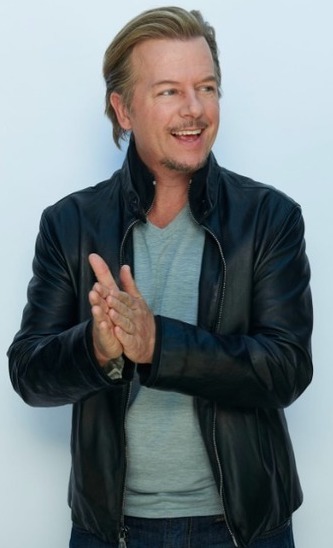 David Wayne Spade (born July 22, 1964) is an American comedian, actor, and screenwriter who was famous for starring on Saturday Night Live from 1990 to 1996, and starring on sitcoms like Just Shoot Me!, 8 Simple Rules (after John Ritter died), and Rules of Engagement.

He was part of the "Bad Boys of SNL" in the early 90s, along with Adam Sandler, Chris Farley, Chris Rock, and Rob Schneider. While most of his castmates either quit or were kicked off the show due to the heavy Seasonal Rot of season 20 (with NBC threatening Lorne Michaels to either revamp his show and make it funny again or cancel it once and for allnote very similar with what happened during the 1980-1981 season and the 1985-1986 season), he stayed on to help the new cast settle in (then left after his screentime was reduced drastically).

Some of his SNL characters included a rude flight attendant who'd tell departing passengers "Buh-Bye" ("Total Bastard Airlines"), a receptionist for Dick Clark who would ask people "And you are?" (even going as far as to give Jesus Christ [played by Phil Hartman] the same treatment), one of the Gap Girls with Sandler and Farley, and Karl from the "Karl's Videos" sketches. Some of his celebrity impressions on the show included Brad Pitt (with whom he actually went to elementary school), Kato Kaelin, Kurt Cobain, Denis Leary, Jeff Foxworthy, and Owen Wilson.

He also did the "Hollywood Minute" sketch as part of Weekend Update, in which he'd make Take Thats to Hollywood stars, including a notorious one to Eddie Murphy in 1995 ("Look, kids! It's a falling star. Make a wish!") which famously pissed Murphy off enough that he vowed never to return to SNL (at least until the 40th anniversary special in 2015).

He was close with Chris Farley, frequently doing sketches together, and starring together in Tommy Boy and Black Sheep (1996). After Farley's sudden death in 1997, Spade notably did not attend his funeral, saying "I just couldn't have gone into a room where Chris was in a box."

He also appeared in a series of Capital One credit card commercials as a phone operator who would answer "No" to everything.

His sister-in-law was the late fashion designer Kate Spade.