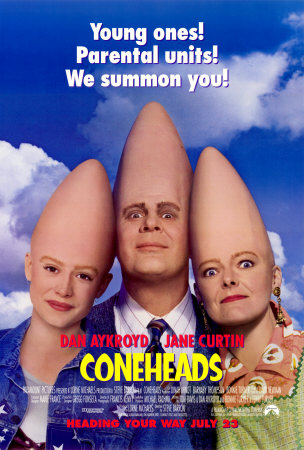 A 1993 comedy film directed by Steve Barron (Electric Dreams, Teenage Mutant Ninja Turtles (1990)) based on the Saturday Night Live sketches about the titular Coneheads. The film was directed by Steve Barron and produced by Lorne Michaels. As was the case with the previous SNL skit-inspired film The Blues Brothers, Coneheads has been said to have made an "accidental" or "unintentional" political statement or social commentary about the nature of the immigrant experience in America, the filmmakers' ostensible intent being merely to entertain. Coneheads remains the only SNL-related film to date to receive a PG rating.