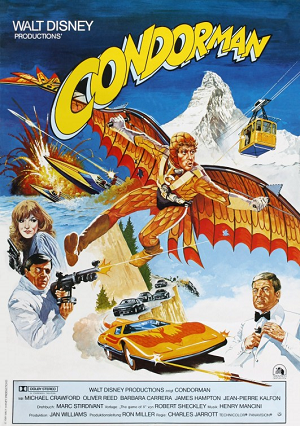 "Have you seen this report on this Condorman? On this man Wilkins? He is an amateur, do you hear? He is not an agent of the CIA! He is a writer of comic books!"
— Krokov, Chewing the Scenery as usual.
Advertisement:

A 1981 Disney live-action spoof of the classic Spy Fiction genre, Condorman follows the exploits of the hapless Woodrow "Woody" Wilkins (Michael Crawford), a comic book writer who is determined to bring his titular superhero to fame by refusing to write anything that he can't actually do in real life. To that end, he sets out to perfect a set of wings that he can fly around town with.

When his friend, Harry, a CIA desk jockey, needs a civilian to handle a sensitive courier mission in Istanbul, he talks Woody into the job. Despite being ridiculously out of place, he manages to both succeed and save a Russian agent from capture at the hands of her enemies.

When that same spy, Natalia (Barbara Carrera), passes word to the CIA that she wishes to defect, but only to their top secret agent, Condorman, puzzlement ensues until Harry realizes that Woody used that as his "code name". They reluctantly ask Woody to escort Natalia, but in return he insists that they help him bring his comic book creations to life. Thus begins a merry romp around Europe as Woody and Natalia are pursued by agents of the KGB determined to get her back at any cost, complete with car chases, boat chases, cable car chases, improbable disguises, Stuff Blowing Up, and a daring rooftop escape scene.

Loosely based on a short-story, "The Game of X", by Robert Sheckley.