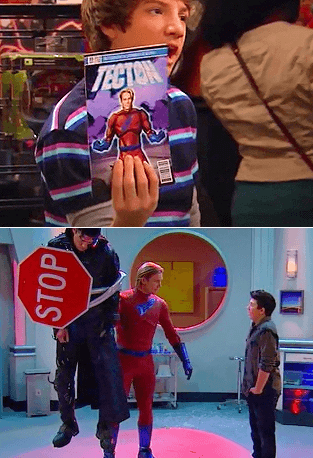 Green Lantern: But this still doesn't explain the Justice Guild comics I read as a kid.
Martian Manhunter: Perhaps the creators of those comics had a subconscious link to this Earth. What they thought was merely imagination was a psychic memory of the Justice Guild's real exploits.
Tom Turbine: I couldn’t have put it better myself.
— Justice League, "Legends, Part 1"
Advertisement:

On another note, sometimes the stars of the Show Within a Show are known/revealed to exist, and this also falls under Comic Books Are Real.

This usually overlaps with Direct Line to the Author and/or Recursive Canon. If it goes both ways — the "real world" characters have their own comic book in the "comic book" universe — then the two worlds are Mutually Fictional.

If Show Within a Show is fictional but the characters still interact with the main show characters, the show has No Inner Fourth Wall.

Also see I Wish It Were Real, Refugee from TV Land, Celebrity Paradox.