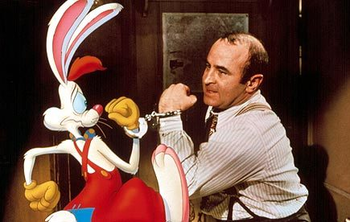 "I don't have the keys for these cuffs!"
Lucy: You know, there's this classic film called The Defiant Ones, starring Tony Curtis and Sidney Poitier. It's about two prisoners – one black, the other white – and they escape handcuffed together...
Brad: And while they don't like each other at first, they come to respect and care for one another by the end.
Lucy: You've seen it.
Brad: No, but I know what you're getting at. And I don't want a moral lesson in tolerance and cooperation. I just want to get through the next couple of hours without committing murder.
— Hey Dude!

Two, usually diametrically opposed, characters are chained or handcuffed together for some period. An Aesop occurs. In the right genre, may result in a forced Enemy Mine. May be employed in a symbolic manner and progress into Chains of Love. In other genres, it will be played for laughs as both characters will then try to carry on with their (often conflicting) activities despite the handicap. Also odds are good they'll want to hide what happened, letting them make up a wild story as to why they are holding one another's hand. Hilarity Ensues (sometimes in the form of Toilet Humor, as at least one of these types of stories has a part where one of the characters has to go to the bathroom and the other doesn't).

This trope may begin with the two characters unaware of the link that binds them together, only to discover it when they try and walk away from each other.

Can overlap with Working on the Chain Gang when this trope occurs between escaping prisoners.

See also Bring the Anchor Along, Locked in a Room, With My Hands Tied.

Unusually, the Trope Namer — the Girls Behind Bars film Chained Heat — is unrelated to this trope.

For a different sort of "chained-heat", go here and here.